Nestled among the serene heights of the great Himalayas, are four pilgrim-destinations namely Yamunotri, Gangotri, Kedarnath and Badrinath, collectively known as Chardham in Uttarakhand. Attracting more and more pilgrims each year, it has become one of the most important hubs of religious travel in Northern India. Traditionally, this pilgrimage tour should begin from the West and end in the East. Thus, the Char Dham Yatra commences from Yamunotri, then proceeding to Gangotri and finally to Kedarnath and Badrinath. In accordance with the Hindu conventions, thousands of devotees take up this pious tour in the hope to experience bliss and successfully purge their souls of all worldly demons. 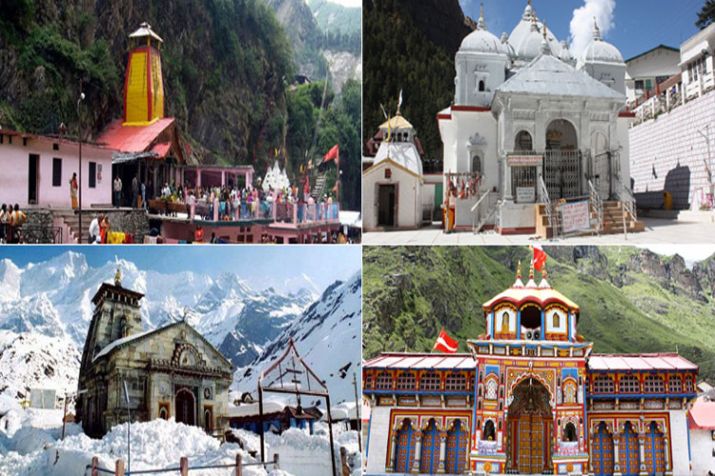 Each of these four sites is devoted to a specific deity. Yamunotri is dedicated to the Goddess ‘Yamuna’ who goes along with the pilgrims to high altitudes of the picturesque Rawai Valley. Yamunotri stands high up in the deep left on the western face of the Bandarpunch Peak. The most sacred area of Yamunotri is a dark rock from where the hot springs emerge, called the Divya Shila. It is believed that a bath in the waters of the Yamuna River protects the devotee from untimely death, that could hinder one’s chances of achieving eternal emancipation.
Gangotri is dedicated to Goddess ‘Ganga’. The shrine overlooks the River Bhagirathi - the name having been derived from the myth of the ancient King Bhagirath’s penance that succeeded in bringing him upon the earth from the heavens. It is said that King Bhagirath meditated here in Gangotri on a rock called Bhagirath Shila, near the temple.
Kedarnath is dedicated to Lord Shiva and is also a part of the Panch Kedar. It is the northern-most Jyotirlinga and is close to the source of the holy River Mandakini. Adi Shankaracharya is said to have attained ‘samadhi’ at a very young age adjacent to the Kedarnath Temple.
Set against the awe-inspiring backdrop of the Neelkanth Peak between the Nar and Narayan mountains, Badrinath is dedicated to Lord Vishnu. It is situated on the bank of the River Alaknanda. According to legends, Lord Vishnu meditated here while his consort Lakshmi took the form of a berry (badri) tree to offer him shade.

Day 1
DELHI - RISHIKESH Morning drive to Rishikesh. It is an approximately 230 kms / 6 hrs journey. On arrival at Rishikesh check-in at hotel. Afternoon sightseeing tour of Rishikesh including Ram Jhula, Laxman Jhula, Swarga Ashram, In the evening enjoy the enchanting view of Ganga Aarti. Overnight Stay at Rishikesh.
Day 2
RISHIKESH – BARKOT Morning after breakfast drive to Barkot. It is an approximately 200 kms in 7 hrs journey. En-route visit Kempty fall at Mussoorie. On arrival at Barkot check-in hotel. Overnight stay at Barkot.
Day 3
YAMUNOTRI – BARKOT Early breakfast drive to Janki Chatti and then trek for Yamunotri. You can cover the trekking distance either by walk or ride horse or on Doli. One side distance for the third day is 36 kms drive and 7 Kms trek. At Yamunotri take a bath in Jamnabai Kund and dip raw rice or potato in Surya Kund, after cooking use it as Prasad. Witness the mesmerizing view of Aarti offered to Divya Shila and to main deity Yamunaji. Later drive back to Barkot for overnight stay.
Day 4
BARKOT-UTTARKASHI In the morning after breakfast drive to Uttarkashi for night halt by covering distance approx. 100 kms in 4 hrs. Visit Vishwanath temple at Uttarkashi. Overnight stay at hotel.
Day 5
UTTARKASHI-GANGORTI-UTTARKASHI After early breakfast, drive to Gangotri which is located at an altitude of 3048 meters and surrounded by snow-capped picturesque Himalayans. After offering prayers at Gangotri temple explore the place. Don't forget to look at submerged Shivling made up of natural rock. Drive back to Uttarkashi. Overnight stay at hotel.
Day 6
UTTARKASHI-GUPTKASHI After an early breakfast, drive to Guptkashi. It is an approximately 210 kms in 7 hrs journey. On arrival check in at hotel, overnight stay at hotel
Day 7
GUPTKASHI-KEDARNATH In the morning leave for Gaurikund, from this place trek to Kedarnath commences. Kedarnath is located at an altitude of 3584 meters from sea level. By cover the distance 45 kms and 14 kms via trekking. To cover trekking distance, you can hire pony or Doli. Kedarnath houses one of the twelve Jyotirlingas of Lord Shiva. On reaching Kedarnath visit the main temple. Overnight stay at Kedarnath.
Day 8
KEDARNATH-PIPALKOTI After early morning visit to Kedarnath temple return for Gaurikund (14 Kms trekking distance). And drive for Pipalkoti, covering approximately 158 kms in 5 hrs.
Day 9
PIPALKOTI-BADRINATH After breakfast proceed to Badrinath via Joshimath. Road distance include here is 77 kms which will be covered in 3 hrs. On arrival at Badrinath check-in hotel and enjoy the evening Aarti at Badrinath Temple. Overnight stay at Badrinath.
Day 10
BADRINATH-SRINAGAR (UTTARAKHAND) In early morning take a holy bath at Tapt Kund and then go for the Darshan of Badrivishal Brahma Kapal for the Pinddan Shraddh of ancestors. Explore the other holy sites at Badrinath like Mana, Vyas Cave, Bhimkund etc. Thereafter, proceed for Srinagar (7 hrs. journey).
Day 11
SRINAGAR-HARIDWAR In the morning after early breakfast drive to Haridwar. It is a 156 Kms, 04 hrs drive. On arrival check-in hotel. Afternoon sightseeing tour of Haridwar including Mansa Devi and Chandi Devi temple, in the evening enjoy the enchanting view of Ganga Aarti. Return to hotel for overnight stay.
Day 12
HARIDWAR-DELHI After breakfast drive back to Delhi.