Chennai, the capital of Tamil Nadu, located on the Coromandel Coast off the Bay of Bengal is considered to be the largest city in South India and the 4th largest metropolis in India. Previously, it was known as "Chennai". This city is reverently titled as "Namma Chennai" by its natives. The term "Namma Chennai" means "Our Chennai". It has an impeccable fusion of traditional culture and urban culture and the culture is entirely dissimilar from the North. Apart from the malls, industries, and multi-dwelling units, you can see that music, dance, art, and other forms of the South are encouraged by the people. From culture to heritage, to liberty to safety to westernization to traditional, Chennai has all the beauty in it. In fact, the latest mall in the city- VR mall is constructed in the shape of a modern temple with vibrant colours to capture the essence of the city. Chennai is a business hub, it has famous companies and multi-national cooperatives working here. A major part of Chennai is considered to be constructed by the British, thus the northern Chennai where the court, central station, and many more buildings have the British style of architecture, whereas, the south of Chennai which consists of residents living in the areas like Adyar and Guindy has large IT companies and professionals. 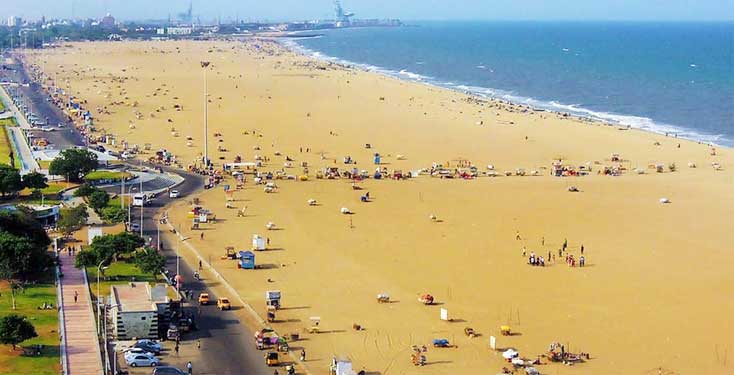 How to Reach The nearest airport is the Chennai International Airport and the railways are connected with the major cities. Also, you can reach there by bus. Tourist attractions The prime attraction of Chennai is definitely the Marina beach. It is considered to be India’slongest beach and the world’s second-longest beach. It stretches from Beasant Nagar in the south to Fort St.In a few distances, you have Chennai Egmore - 2km, Mambalam - 4km, Mahabalipuram - 54km, Kanchipuram -72km, and Pondicherry - 150km. Then comes the Sri Kapaleeswarar Temple which is basically devoted to Lord Shiva and the architecture was constructed in Dravidian style and it consists of beautiful sculptures. Next is Guindy National Park wildlife Sanctuary where you can find spotted deers, blackbucks, jackals, snakes, geckos, tortoises, and a wide variety of butterflies and spiders and also many other invertebrates. It is the 8th smallest National Park of India. Then comes Fort St. George which holds glory and greatness in Chennai. It was one of the British architectures and it was constructed by the British East India Company. Next, is the Government Museum Complex which was built in the 1800s and it is the second oldest museum in India, the tenth oldest museum in the world and the third-largest museum in the world. Also, in the museum premises, the National Art Gallery is present. Then is the Valluvar Kottam is a monument in Chennai which is devoted in the memorial to the classical Tamil poet-philosopher Tiruvalluvar and the architecture is shaped like a temple chariot and is almost similar to the temple chariot in Thiruvarur. A life-size statue of the saint has been set up in the chariot which is 33meter tall. The 133 chapters of his famous work Thirukkural have been illustrated in bas-relief in the front hall corridors of the chariot. By average, the monument is visited by about 700 people during weekdays and 1000 people during weekends. We skip next to the Birla Planetarium which is located at Kotturpuram which falls between Adyar and Guindy. It is the most modern planetarium in the country. Also, along with it, there is a Periyar Science and Technology Museum which is considered to be a place of interest to students and other science scholars. If you travel for a few miles, you can visit Mahabalipuram which is located on the outskirts of Chennai and you must take a one day trip there. It is one of the oldest cities in India. It is well known for its huge monuments, cave sanctuaries, and sculptures. It also has serene beaches, shore temples, Krishna’s butterball, and much more. A monument complex at Mahabalipuram, which is popularly called the Group of Monuments, which has its rock art and relief sculptures, and is a UNESCO world site. Even there is a place named Mylapore which is considered to be one of the oldest residential parts of the city. It is also called Thirumayilai. It is claimed to be the birthplace of the celebrated Tamil philosopher Tiruvalluvar. This locality is famous for its busy streets which have small food eateries and temples. Also, it is known for its tree-lined avenues, temples, Katcheri seasons, and Ramakrishna Math. Also, the Phoenix market city is considered to be the largest mall in the city and the fourth largest mall in India according to the sources of 2018. It has a variety of brands from high end to luxury ones and restaurants serving all cuisines.