Meghalaya The abode of clouds

Meghalaya, the Abode of Clouds - It is a beautiful North-Eastern state, also called the Scotland of the East has majestic mountains and rangy trees along its side and it is divided by the boundaries of Assam in the North and Bangladesh in the South. It was formerly a part of the Assam. The name ‘Meghalaya’ was given by Rabindranath Tagore. The Seven Sisters of North-East India can be quickly reached via this state. You would surely have a feeling that you are in heaven as you drive between the clouds. It has magnificent caves and appealing waterfalls which will definitely not take a second to ruin over your heart. Also, while reaching out to the root bridges, it will be an amazing journey all along. You would remain awestruck when you get to see the crystal clear water with stones beneath and fishes roaming everywhere in lakes and rivers while taking a boat ride. All the residents of Meghalaya happen to be the friendliest ones and also, works as a responsible citizen by maintaining the roads clean and also by guiding the tourists. It has tremendous spellbinding waterfalls which will just let you feel as if you are just in your dreams. Mawsyram and Cherrapunjee are considered to be the wettest places on Earth. Also, Mawlynlong is Asia’s cleanest village where you would certainly get a positive vibe when you walk along the streets of the village and notice greenery and cleanliness everywhere. Meghalaya consists of three tribes, the Garo, the Khasi, and the Jaintia. Also, the society is matrilineal and their respect for women is immense. 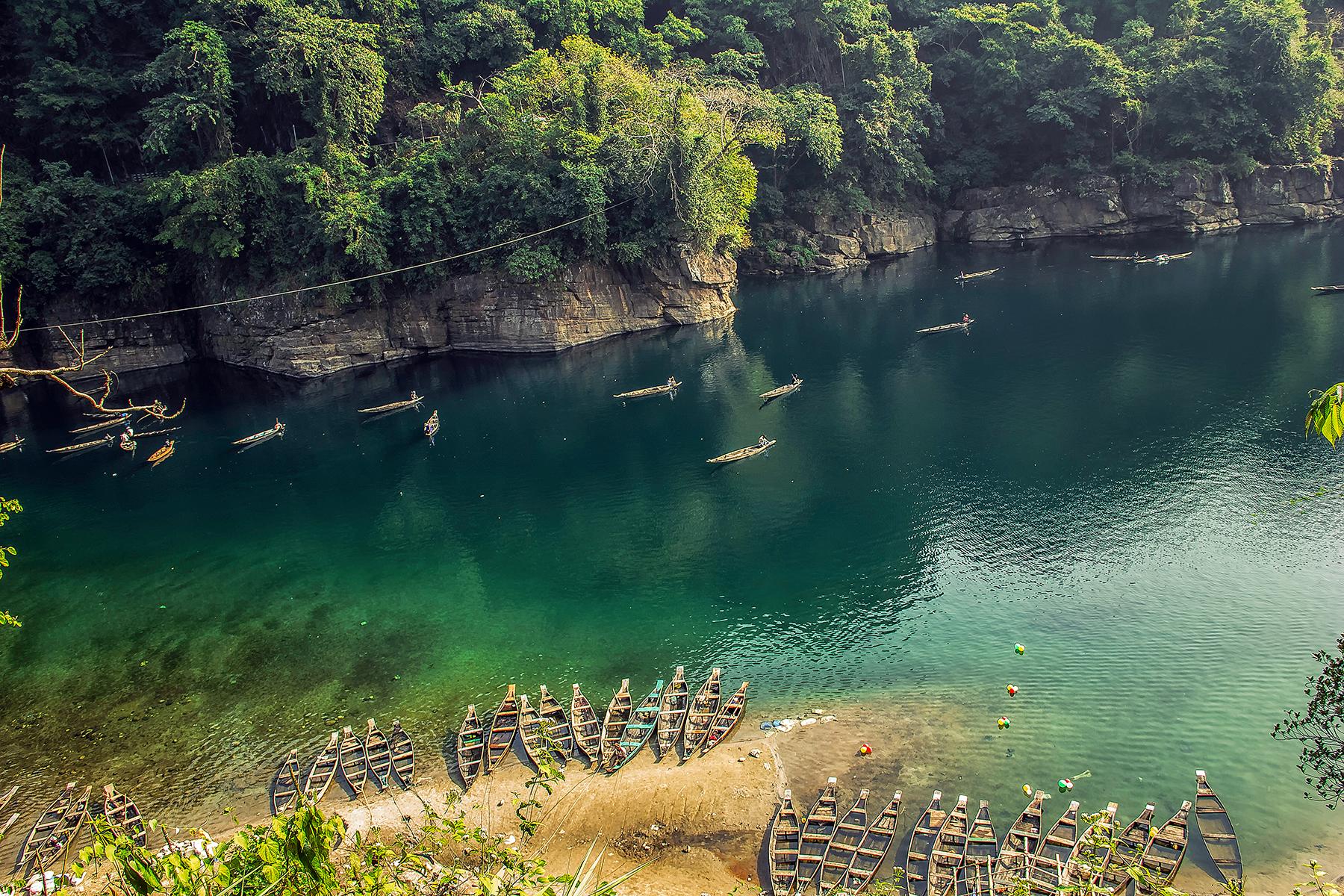 How to Reach Take a flight, train, or bus as per your convenience to Guwahati. From there, you can take a taxi or shared cabs or can rent a car and reach Shillong. You will find plenty in Kamakhya Railway Station and Paltan Bazaar. Tourist attractions Since it is famous for the subtropical biodiversity, natural beauty, and highest rainfall, there are some aesthetic places which are just awe-inspiring. There are some fascinating lakes, rivers, and waterfalls like Dawki Lake, Umiam Lake, Nohkalikai Waterfalls, Elephant Falls, Seven Sister Falls, Dain-Thlen Falls, Kynrem Falls, Krang Suri Falls, Byrdaw Falls, Langshiang Falls, Thum Falls, and Wards Lake. Next, come the wondrous famous Living Root Bridges and Umshiang Double-Decker Root Bridge which is more than 180-year old which are impressively built by the Khasi tribes supported by Mother Nature. Then, we jump on to the gigantic caves like Mawsmai Cave, Garden of Caves, Siju Caves, and Arwah Cave which are ages old. Even, there are the cleanest villages like the Mawlynlong village and Khasi Heritage Village. Then comes the world of greens including forests, rocks, valleys, and canyons such as Mawphlang Sacred Forest, Kyllang Rock, Laitlum Canyon, and Mawkdok Valley. Also, there are some beautiful parks, viewpoints, and sanctuaries like Shillong Peak, Eco Park, Lady Hydari Park, Mawkdok Valley View Point, Thangkharang Park, Siju Bird Sanctuary and Tiru Peak. Other must-visits and must-dos are David Scott Trail, Don Bosco Museum, shopping at Police Bazaar and Leh Duh Market, and Golf in Shillong. Food The predominant food in Meghalaya is rice with spicy meat and fish dishes. Also, they relish the meat of goats, pigs, fowl, ducks, and cows. The famous dishes of the natives are Jadoh, Ki Kpu, Tung-rymbai, and pickled bamboo shoots. Handicrafts As you are visiting the most naturalistic place, you must take some souvenir along with you to gift your loved ones so you must the indigenous beautiful baskets which is known as 'Meghum Khoks', Open Weave Carrying Basket, Closed Weave Carrying Basket, Small Storage Baskets, Coiled Cane Containers, Large Storage Baskets, Rain Shield and Headgears, Winnowing Trays & Fans, Mud Shovels, Shield made of bamboo plints, Khasi Bamboo Comb and Khasi Bamboo Pipes. Festivals Wangala Festival Wangala is one of the important festivals which is also known as the Hundred Drums Festival. It is mainly celebrated by the Garos. It is a post-harvest festival which is celebrated at the end of the year. It is a thanksgiving festival to Misi-A-Gilpa-Saljong-Galapa, the god of fertility. Rice Beer is a famous food that is cooked during this special event. Behdeinkhlam Festival It is a four-day festival and is mainly celebrated by the Jaintias. It is celebrated before the seed sowing season in July. The literal meaning of Behdeinkhlam is 'Chasing away the Plague'. Shad Sukra This is another festival that is primarily celebrated by the Jaintias. It is celebrated before the sowing season which is basically in mid-April or May. Shad Suk Mynsiem It is the most important festival of the Khasis and is also celebrated by Gars and Jaintias. It is celebrated in April. This is a three-day festival which is called the 'Shad Phur'. Nongkrem Festival It is mainly celebrated by the Khasis. It is a 5 days thanksgiving festival which is held in October or November. Native Language The languages which are spoken in Meghalaya are Garo, Rabha, Khasi, Assamese, Koch, Marathi, Hajong, Maram, Nepali, Sylheti, and Hindi. Traditional attire Mekhla is one of the traditional dresses of Assam which is also worn by the women of Meghalaya. The females of the Khasi tribe wears a dress called 'Jainsem'. The females of the Jaintia tribe dresses like the Khasi females but with the addition of a 'Kyrshah'. The females of the Garo tribe women wear a blouse, raw cotton called 'Dakmanda', and the 'Daksari' which is wrapped like a 'Mekhla'. The jewellery they wear is called 'Kynjri Ksiar', which is made of 24-carat gold. Then, the men of the Garo tribe wear a loincloth as their traditional dress. The men of the Khasi tribe wear a long cloth around their waist which remains unstitched and the dresses of Jaintia tribe tend to have similarities with the Khasi tribe.