Ranchi - The City of Waterfalls and Lakes

Ranchi, the capital of Jharkhand, is located on the southern part of the Chhota Nagpur plateau and is called “The Land of Forests". The word “Ranchi” comes from the name of the local bird "Rinchi". It has many waterfalls, lakes and hills present situated close to the city which enhances the beauty and is popularly known as "The City of Waterfalls and Lakes". It lies along the Subarnarekha River. It experiences a pleasant climate for its hilly topography. It is also a land of tribal groups during the Sarhul festival gather in Ranchi and organize a procession. Ranchi is also called "Manchester of the East" because the city has abundant minerals. It also has eighteen percent of the national mineral production. It is an industry hub since there are numerous industries present in the city and people are working on it from every corner of the city. Also, the number of industries like marketing, media, healthcare, education, etc. which has given a boost in its number. Also, there are umpteen temples where you can pay a religious visit that will soothe our peace of mind. Popular dance forms are Chhau and Santhal which are group dance performed by the Santhal tribe. Ranchi is also at the forefront of Indian struggle against the British, Ranchi Hill known to locals as Phansi Tongri, was the site where several freedom fighters were hanged. 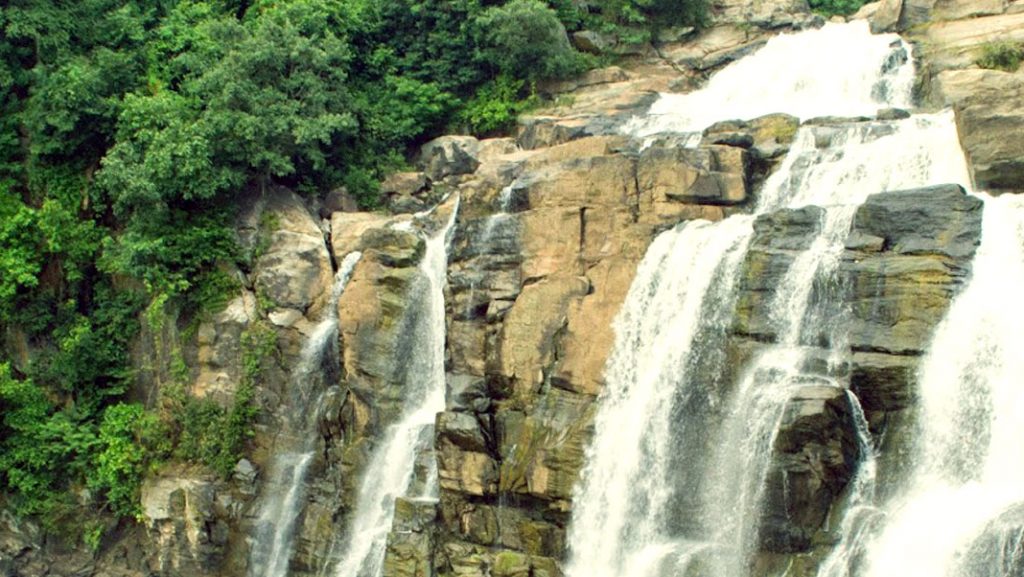 How to Reach You can take direct flights to Ranchi airport or you can take trains to the nearest station which is Hatia. Also, the roads are well-connected so you can take buses or travel by car. Tourist Attractions Johna Fall It is also known as “Gautamdhara” and is located at about 40km from the city Ranchi on Ranchi-Purulia Road. You would remain by looking at the breathtaking scenic view up from the hills which are surrounded by forests after you climb up 700 steps. Dassam Fall It is one of the deadliest falls in India which is located at 34km from the city of Ranchi on Ranchi-Tata Road near the Taimara Village. The waterfalls fall from a height of 144 feet and the view is awe-inspiring. Hundru Fall It is the highest waterfall in the state and is situated on the course of Subarnarekha River which us falling from the height of 320 feet. You need to climb 750 steps up the hill to reach the foot of the waterfall and again, the natural beauty just makes us go crazy. Ranchi Rock Garden It is situated at a distance of around 4km from Albert Ekka Chowk. It stands second in importance and fame after the Garden Of Jaipur. It has beautiful statues and a beautiful garden present. Kanke Dam, which lies at the bottom of the Gonda Hills grabs more attention from the people. Tagore Hill It is the scenic locality of Morabadi. The view of sunrise and sunset from the hilltop is one of the most beautiful things to see. Earlier, it was the ashram of Rabindranath's elder brother, Jyotindra Nath, and even before that, it was a rest house. Birsa Zoological Park It is considered to be one of the beautiful zoos in India. It covers an area of around 104 hectares of land. It has natural forests and water bodies which will make you feel that you have stepped into a real forest area. It is divided into two National Highways which helped in the partition with the area which is larger being the home of the wild animals and the smaller area being the home of the botanical section. You can find lions, tigers, hyenas, foxes, wild cats, barking deer, and elephants out there. Ranchi Lake It is situated at the foot of Ranchi hill and located at the center of the city which makes it quite popular. The landscape of the lake is mesmerizing with mountains in the backdrop. Boating facilities are available in this venue. Sun Temple It has an extremely fascinating architecture and has the shape of a giant vehicle with 18 wheels driven by seven horses. The theme of the temple is the same as the Konark temple of Puri. A holy pond is present which is highly admired by the Hindus and you will be allured by looking at the lush greenery and peaceful surroundings. Jagannath Temple It is a hilltop majestic architecture built in the 17th century. It is considered to be the second-largest Jagannath Temple after the Puri Temple. The theme of the temple is almost like the Puri Jagannath temple. Panch Gagh Falls It is situated about 55 km from Ranchi and falls on the Ranchi-Chakradharpur Road. The waterfall consists of five streams which look wonderful when it falls from a great height. The absolute beauty will keep you enthralled by the five falls. Famous food The traditional famous dishes of Jharkhand are Dhuska, Litthi Chokha, Bhel Puri, Puchka, Chura Bhunja, Malpua, Pittha, Handia, Rugra, Arsa, Chilka Roti, Bamboo Shoots, Thekua, Aloo Chokha, Til Barfi, Mitha Khaja, and Laung Lata. Handicrafts Normally, local artifacts made of bamboo, wood products, toys, and metal craft are very beautiful and are must-buys. Also, the traditional‘Paitkar’ paintings and stone carvings are quite famous. Festivals Sarhul Festival is one of the important festivals of Ranchi which is celebrated during the spring season, i.e., the month of February-March that marks the beginning of the New Year. Also, Sal trees get new leaves and flowers. Also, festivals like Basant Panchami, Holi, Diwali, Chath, Jityya Bhaiya are celebrated here. Cultural Art Traditional folk music, instruments, and dances are the norm. Ranchi is famous for the Dokra art form. Some of the popular dance forms are Chhau and Santhal, which are group dances performed by the Santhal tribe. Karma is another popular folk dance performed during the Karma festival in the month of August. Traditional Attire The traditional clothing for women in Ranchi is saree and blouse. The traditional clothing of men is they put on a single piece of cloth which is known as Bhagwan. They also wear kurta-pajama and Dhoti. During festivals and special occasions, men wear sherwani and kurta pajama.